For some non profit groups, magazine fundraising is a perennial favorite. A magazine fundraiser allows for recurring revenue. Some schools, churches, booster clubs, charities and other non-profit organizations sell them every year with consistent results.

A magazine fundraiser for schools

One reason the school magazine fundraiser works so well for raising money is that most households already subscribe to at least two. Since they will have to renew their favorite subscriptions eventually anyway, they might as well renew it from someone who is promoting a worthy cause—like yours.

The magazine school fundraiser also works because of the tremendous variety of magazines that are available. Most people will be able to find at least one periodical that interests them and fundraising magazine subscriptions are usually a lot cheaper than the newsstand price. 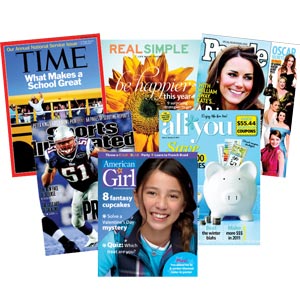 So it’s an easy sale. No pledges, sponsorships or donation soliciting (begging) required.

The magazine subscription fundraiser…so many choices

There are magazines for nearly every topic under the sun. In fact, some companies provide subscriptions to over 650 different titles that your customers can choose from including news, sports, science, fashion, lifestyles, hobbies, home improvements, and many more. There is truly something for everyone. There are even a number of magazines for kids. What a great way to spark a child’s interest in reading.

The mag fundraiser is also easy to run. There’s no product for your school or charity to buy, so your volunteers just show the mag fundraising brochure to family, friends and neighbors, and then fill out a form. That’s it. You don’t even have to deliver the magazines when they arrive since the post office takes care of that. It’s simple. No inventory and no product delivery.

Now it’s even easier since the whole process can be done online.

What’s even better is that these same customers will likely order from your magazine fundraisers again each year when they renew their subscriptions. Magazine subscriptions also make great gifts.

You’re not limited by geographical area either. Your fundraiser volunteers can expand their customer base to include all their friends and relatives across the country.

Fundraising.com – Join the new and improved Online Magazine Fundraising Program and start to raise money now with very little effort for FREE ! Create a personalized fundraising page with your own photo album and personal message, then share your page via email, Facebook, Twitter and MySpace! You’ll earn up to 40% profit, entirely online! Supporters can also shop for Restaurant.com Cards and delicious cookie dough. And because it’s so low maintenance, it’s perfect to run alongside your traditional campaign to instantly boost profits! Click Here for a free information kit, or call toll free, 1.866.216.2080 .

When I was teaching at a grade school a number of years ago we decided to sell magazine subscriptions to raise money for Reading Counts! library books. We chose the selling of magazine because we felt that we would be getting good reading materials into the homes of our school community as well as getting quality books in the Media Center.

We asked for teacher and parent volunteers to set up the program under the leadership of the Media Specialist (me). It is very important to have the cooperation and support from staff members and parents when planning a fund raiser. We had a number of informal meetings where members of the team shared information on various Magazine Fundraiser Companies, and there are a lot of companies in this business. Once the information was gathered we looked at the options to see what would be best for us.

When selecting a company we looked at the following criteria: 

Another consideration was the percentage we would receive from selling the subscriptions. We were in the business of raising money for books, not selling magazines although getting magazines in familys homes was a great side benefit.

Once we had chosen a company we contacted them. We asked for a representative from the company to meet with the team and bring all of the information and the contract. A number of our parents work in the legal field and one of them volunteered to check it over for any hidden problems. This is very important. What the representative says is meant to get you to buy into the program. Be careful to check out any hidden commitments.

We were happy with our company and we went forward with the program. We decided on a reward program. The parents suggested that the best reward would be free subscriptions to the magazine, and this was included in the contract. We also decided to have little incentives such as a pizza party for the top class and cookies or little prizes for those who achieved certain goals.

We obviously did not want to spend a lot of money on prizes and we received donations from parents for the prizes. A brand new stuffed animal that a child does not want makes a great prize for another child.

The fundraiser ran for 3 weeks. You do not want to run it for too long or people lose interest. We had it for 3 weeks so people could sell to extended family members. We ran it over Thanksgiving vacation since this is great time that extended families get together.

Needless to say, the fundraiser was a great success. And even though I am no longer Media Specialist at the school the magazine subscription fundraising program is still a part of their yearly fundraisers.

I hope you can use my experience to encourage others. Thank you.

What we did to make our magazine fundraiser successful was the prizes we offered the students. They all worked extra hard for the prizes, and we ended up making over $5000.

We gave out 4 Wii’s for $500 sales and 3 iPod touches for students who sold over $800 worth of magazine subscriptions.

They would go online and set up a “store” and send e-mails to everyone they knew who had a magazine subscription. How these kids managed to do this I do not know, their parents probably helped them somehow, but that is good that they want to be involved with the school’s fundraiser.

Approximately 7 or 8 years ago, I was a Girl Scout leader for my daughter’s Brownie troop in NY. In addition to working full time, I was one of only two moms who volunteered. To say I was overwhelmed with the crafts, field trips, and overnight camping expeditions is an understatement.

I knew about the cookie sales from my days of scouting, so I was prepared for that. I started to panic when I heard about the magazine sale. Needless to say, I had no reason to worry. The magazines basically sold themselves.

Each girl was asked to address something like 10 postcards inviting relatives to order their magazines through us. Most people receive at least one magazine anyway, so we weren’t really asking them to do anything special.

In the end, my troop sold more than 100 magazines and raised several hundred dollars.

We were able to end our year with a trip to Hershey Park, which all of the girls will remember forever. I think a magazine sale is one of the best fundraisers out there. After all, who needs any more wrapping paper?