Looking for a Golf Fundraiser?

Golf is a popular sport in many countries around the world, and especially in the US. This popularity makes it an ideal tool for fundraising.  One way to raise money with golf, and have fun at the same time, is with a golf fundraiser.

A golf tournament for fundraising is usually done by establishing teams of four players who take part in the fundraiser by paying to play.  They play the entire course once or twice for a chance to win prizes.  This could also be accompanied by a dinner or luncheon, which might be included as part of the entrance fee paid by the players.

Another great fundraiser for golf is a shoot-out.  This can be a stand-alone event or combined with a golf tournament. The idea is pretty simple. Set up a 125 yard hole at a local driving range, with 3-5 foot circle around it.  Over the span of 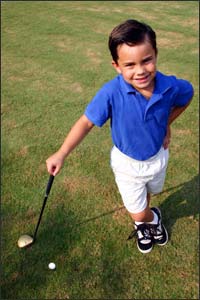 several days, let interested golfers try their skills at a dollar or two per shot. Participants go to the next round by making a hole-in-one or having a ball land within the circle. From there the qualifiers have a shoot-out on the same hole to see who goes to the finals.

Small prizes can be given to the qualifiers and the finalists go on to the last round.  The golfer who shoots closest to the pin wins the shoot-out.  But if someone gets a hole-in-one, they can win a million dollars.

So, what do you do if someone gets a hole-in-one? How can your group possibly afford to pay a million dollar prize?

Not a problem. Hole in One International provides insurance for golf shoot-out competitions like this to cover the million dollar prize in case someone defies the odds and gets a hole in one.  This allows fundraisers to create a lot of interest and excitement with a million dollar prize, without any risk of having to pay it out.  And the insurance is cheap.  As of this writing, it can cost as little as $150.

With the right planning and lots of publicity, this fundraiser could earn your group over $50,000.00.  You may even want it to become a yearly event that gets bigger every year.

If you’re looking for a more family-friendly golf fundraiser, consider a mini-golf tournament, which is good for all ages and skill levels.