A watermelon eating contest is a quick and easy fundraiser that doesn’t require a lot of prep time. There is an investment required however: You will need to purchase enough watermelon to satisfy all of the contestants.

A way to cut down on expenses is to ask a local grocery store if they want to sponsor the event by donating the watermelons or by providing them at a discount. In exchange, their company will be represented at the event by a sign or, if they would prefer, a vendor table.

This event works best if it takes place during another event such as a picnic or at a sporting, school or church function. There will already be a crowd, and those types of events make a perfect backdrop for a watermelon eating contest.

Each participant and/or spectator will be asked to pay an entry fee. That is where the funds will come from. Keep in mind that this isn’t the type of fundraiser that is going to raise thousands of dollars, but it is a good option to raise a few hundred dollars quickly. 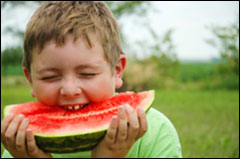 Once all participants have paid their fee, have them sit at a table with a plate of watermelon in front of them. Have people standing by ready to refill the plates as needed.

Have a set time (3-5 minutes is a good estimate) in which the participants will eat as much watermelon as possible. You will need several judges observing in order to be sure that each participant is eating all of watermelon from their plates and not disposing of it some other way.

Once the time is up, you will be ready to declare your winner. To make declaring a winner easier, it’s a good idea to have a set amount of watermelon on each plate. For example, each plate may hold 10 ounces, or any measurement that suits you. That way, the judges will know that the contestant ate, for example, five plates and that five plates equal xx amount of watermelon.

Children will love taking part in an event like this, but be sure that small children have their parent’s permission. Permission slips are advisable, but if that isn’t feasible, make sure their parents are nearby.

A very small prize, such as a blue ribbon, should be awarded to the winner. Again, this fundraiser isn’t going to make your organization rich, but it will raise a few dollars, and a good time is sure to be had by all.

Get the word out

As with any fundraising event, you want to promote your contest as much as possible before the day begins to get as many contestants and spectators as possible.